During an FDA inspection, investigators may observe objectionable conditions. At the close of the inspection, these conditions are noted on the FDA 483 Observations. Indeed, they are violations of FDA laws.

As a medical device or drug manufacturer, you may or may not choose to respond to them. Unlike a Warning Letter, you are not required to respond to them. However, depending on the significance of the observations, I suggest responding to show you are treating them seriously and correcting them. Yet even a well-written response doesn’t mean you are entirely out of the woods if the observations are egregious. It can still be classified as an OAI, meaning you can still receive a Warning Letter or other official action. However, it may take a few months before you get it.

Poorly written FDA 483 Observations Responses can negatively impact you. But a well-written FDA Form-483, Inspectional Observations response can neutralize it, and even remedy it. Therefore, don’t let just anyone write this technical response to the FDA.

Although Form-482 has to be issued every time they begin an inspection, Form-483 does not. It is issued only when an investigator makes observations during their inspection. Therefore, no written objectionable observation means no FDA-483 Observations.

However, just receiving Form-483 doesn’t means you failed the inspection. By the same token, not receiving a Form-483 at the close of the inspection doesn’t means you have successfully passed the FDA inspection. For example, if an investigator observed something and wants HQ to get involved—for example, Section 510(k)-related—they will not record it on the Form-483, Inspectional Observations. Even without a Form-483, you can still get a warning letter from the FDA.

On the contrary, even if you receive Form-483 at the close of the inspection, the inspection could still be a successful one. Therefore, don’t be overly stressed because you received the FDA 483 Observations. However, you don’t want to ignore even the most minute observation.

The solution is to engage early with someone like us who understands FDA 483 observations.

Our lead FDA consultant is a former FDA field Compliance Officer. His duties included reviewing inspection reports from investigators, Inspectional Observations on Form-483, draft Warning Letters, or other official actions. As such, we can help you write a response letter to the observations.

It’s imperative that you take copious notes during an FDA inspection. Don’t overlook even a seemingly negligible remark expressed by investigators. For this task, assign an excellent note-taking individual from your company to do nothing but take extensive notes.

If investigators demonstrate an interest in a subject, they may or may not discuss it with their superior, compliance officer, or Headquarters. Therefore, the item they notice may not be listed on the Form-483, Inspectional Observations. This is one of the prime examples of how you can still get a Warning Letter even without an FDA 483 Observations.

A well-written response to FDA Form-483 observations is imperative. This is your chance! Don’t waste it with a mediocre or poorly written response letter. It’s an alternative way of having a second chance of inspection. It’s not exactly a do-over, but it’s still extremely important. Get it right this time!

As such, you want to keep it as realistic as possible. Don’t make any promises you can’t keep. Some people have a misconception of the magnitude of the response letter. Again, it’s not just another formal or company letter. There is no limit for how long or how many pages it can be.

Engaging someone like us will help you to understand the observations better. However, please don’t engage us if you are looking for a quick fix.

First of all, depending on the significance of the violations, we may visit the facility inspected by the FDA. Then, we need to understand the objectionable conditions to offer permanent corrective actions. Remember, you don’t get a second chance with the same violation. Therefore, you will have to fix it so it will never be repeated.

The bottom line is, if you learned the lesson the hard way, don’t waste it. Fix it for good no matter what the cost is. Again, don’t let an unqualified person write the response to FDA 483 Observations. Don’t make a bad situation worse or make it “unfixable.” Remember, a poor response can hurt more than no response at all.

If you are reading this article and the FDA has not inspected you, engage us as soon as possible to do a mock FDA inspection. But, again, our aim is to minimize the conditions, not prevent them entirely.

Recently issued 483s are available on the FDA website. 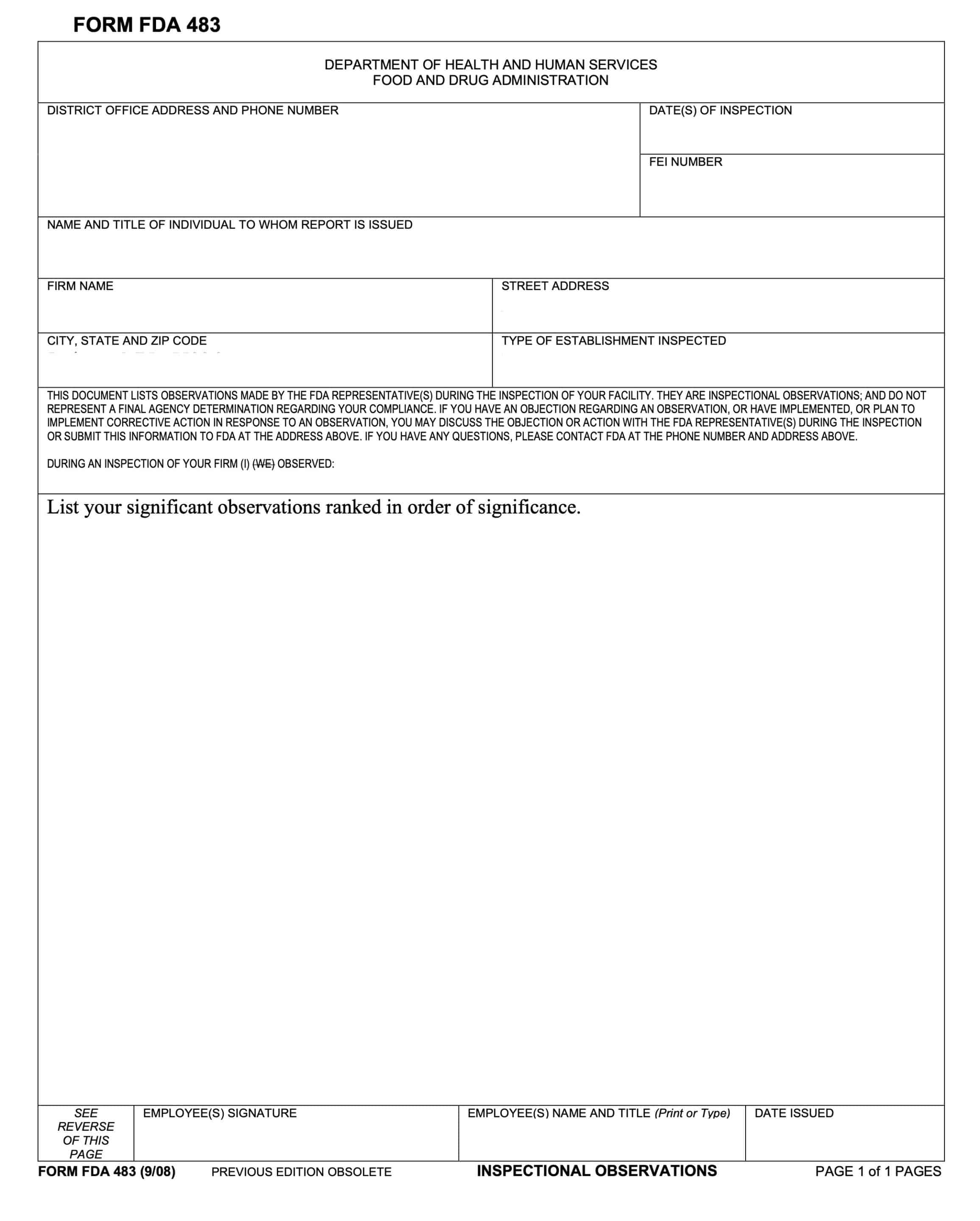